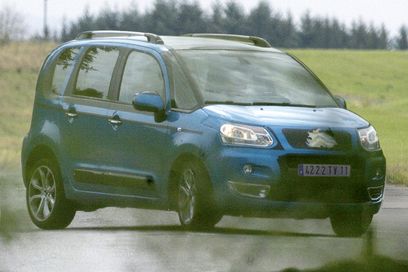 The new Citroen supermini-MPV is unveiled! (Look at the previous spy shots.) The Citroen C3 MPV is a vital part of the company’s plans because as well as the Note, it will aim to steal sales from the Honda Jazz and Renault Modus, plus the next-generation Opel Meriva.

The C3 MPV is targeting customers who want space and flexibility in a compact, eco-friendly package, but designers will also tempt them with style.

At the front, the bold nose gets intricate headlamps, neat lower spotlights, large air intakes and a big grille, on which the famous double-chevron badge is mounted. Moving back, the curvy A-pillars are similar to those on the C4 Picasso, but are thinner and have more glass for better side vision.

A production-ready version of the C3 MPV will debut at the Paris Motor Show in October, with sales starting in early 2009. The range is set to be priced from around $20,000.