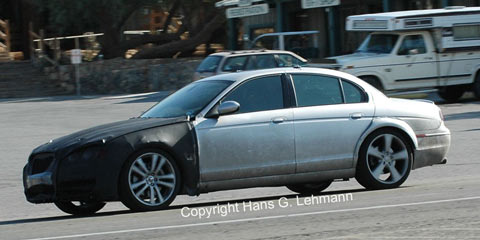 The new S-Type was caught in the Californian desert. Code-named X250, the 2008 Jaguar S-Type will take direct aim at the BMW 5-Series. The new S-Type will adapt styling elements from both the RD6 and R Coupe concept cars and will be getting an oval mesh grille split by a chrome bar with the Jaguar badge. Engines come from the current S-Type lineup: a 2.7-liter turbodiesel, a 3.0-liter V-6 and a 300-hp, 4.2-liter V-8 will be carried over. A 420-hp V-8 will be derived from the XKR.

It’s expected that we’ll see the new S-type early in 2008. The photos show S-Type prototypes, while two additional computer renderings give an artist’s impression of how the new model could look like upon its release