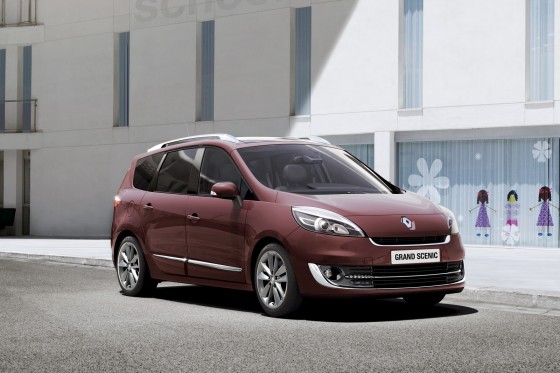 Renault Scenic and its bigger brother, seven-seat Grand Scenic, have received a facelift for the 2012 model year. Both Scenic models gets a new front end with LED daytime running lights and gloss black features, chrome details up front, on the profile and the tailgate strip, redesigned rear lights on the Renault Scenic and a different lower air intake design and longitudinal roof bars for the bigger brother.

The TCe 115, a brand-new turbocharged petrol engine, will be added to the range later.

The Scenic’s interior has received minor facelift, including a different beige trim for the Expression and Privilege/Initiale versions and a dark charcoal trim for the Privilege Initiale. There is also new upholstery and an optional leather/Alcantara package.

The facelifted compact MPV are the first models of the Renault to feature the Visio System. It uses a camera to control a lane departure warning system and an automatic headlight function that detects lights of nearby functions and adjusts the lights’ beam accordingly.