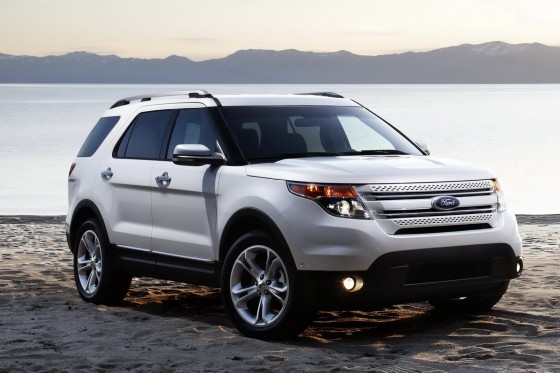 The all-new 2011 Ford Explorer SUV was unveiled today and will go on sale in the U.S. at the end of the year with pricing start at $27,995. The new Ford Explorer switched from a heavy body-on-frame to the same unibody structure with independent from and rear suspension used on the Ford Taurus sedan and Flex crossover. Ford’s SUV will be offered with a 3.5-liter V6 engine delivering an estimated 290HP, and 20 percent better fuel economy.

As an option the next Ford Explorer can be equipped with a new 2.0-liter turbocharged four-cylinder EcoBoost petrol producing a projected 237HP at 5,500 rpm and 250 lb.-ft. of torque from 1,700 rpm. Both engines are hooked up to a six-speed automatic transmission. The four-cylinder Ecoboost is offered only in front-wheel drive configuration while the V6 model can be equipped optionally with a new, intelligent all-wheel-drive system developed with formerly Ford-owned Land Rover.

The all-new Explorer will be available in three trim series levels – base, XLT and Limited.

Explorer Limited includes all base and XLT content, plus: