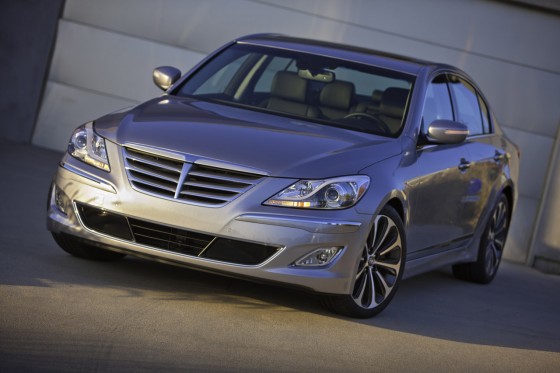 The pricing for the 2012 Hyundai Genesis has officially been set at $34,200, not including $850 for delivery. The facelifted Genesis four-door sedan was unveiled at the 2011 Chicago Auto Show.

The base Genesis 3.8 sedan, which now uses a direct-injected 3.8-liter V6, rated at 333 horsepower and 291 pound-feet of torque – gains of 43 and 27, respectively, versus the 2011 model. A new eight-speed automatic transmission is also on tap, meaning the Genesis 3.8 will achieve up to 29 miles per gallon on the highway.

The 4.6 used to be the range-topping Genesis, but for 2012, Hyundai has introduced the new 5.0 R-Spec model, which, as its name suggests, is fitted with the automaker’s brand new 5.0-liter direct-injected V8. Paired with an eight-speed automatic transmission, the Tau 5.0 is good for 429 hp and 376 lb-ft of torque, while still returning 16/25 mpg city/highway. The R-Spec model also features unique 19-inch wheels, sportier suspension tuning and more aggressive appearance updates. The top-shelf Genesis retails for $46,500.