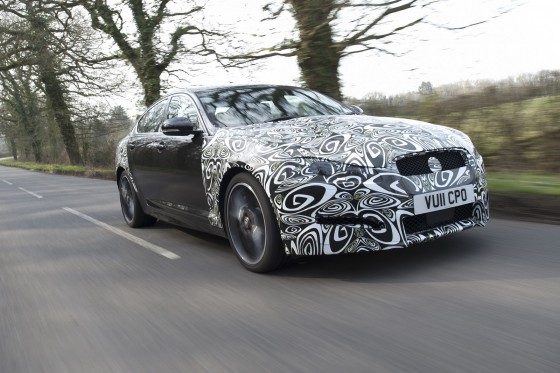 Here are the first spy shots of the heavy camouflaged mule of the facelifted Jaguar XF that will receive its world premiere at next month’s New York Auto Show.

The facelift XF will receive a makeover that includes a new front fascia with new lights, a redesigned front grille and reshaped bumper, which oddly enough, bring it closer to the original C-XF Concept that previewed the car. The 2012 Jaguar XF will also benefit from tweaks to the interior and the overall quality, the introduction of new tech systems and an upgraded suspension for improved ride and handling.

The 2012 Jaguar XF will gets a new 2.2-liter four-cylinder turbo diesel engine. Among other things, the 2.2L unit features a water-cooled turbocharger with low-friction pistons, new injectors and a new crankshaft, while Jaguar also added a new Stop-Start system, which is estimated to further increase overall fuel efficiency between five and seven per cent.

The diesel engine produces 190-horsepower and 332 lbs ft of torque, with Jaguar claiming that it is capable of returning 52.3 mpg UK (equal to 43.5 mpg US) on the combined cycle.