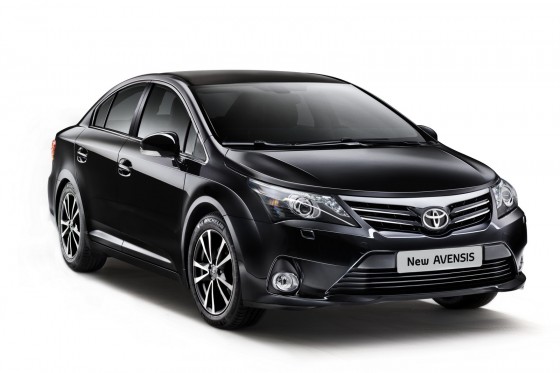 Today Toyota officially revealed its Opel Insignia-rival at the Frankfurt Motor Show. The facelift brings cosmetic changes both on the outside and the cabin. While overall dimensions remain the same as the previous model, the mid-size sedan and the estate version benefit from a fresh face with a redesigned grille that has a chrome upper “lip” and new, narrower headlights that incorporate daytime running lights. At the rear, both body styles gain redesigned tail lamps.

The new Toyota Avensis sedan also sports a new rear bumper design with a center guard and a chrome trim for the license plate, while depending on the trim level, the Avensis is offered with 16-inch steel or 17- or 18-inch alloy wheels.

The interior’s dashboard has received some minor tweaks to improve the ease of use of the center console switchgear, while the instruments have white instead of red backlighting. The cabin also gains new upholstery and higher quality trim on parts frequently touched by the driver or passengers, the switchgear and the center console.

Toyota is introducing a longer list of active and passive safety systems in order to offer even better protection. Chief among them is the optional Pre-Crash safety system that uses a radar sensor to scan the road and warn the driver of potential hazards. When the driver brakes, it activates the seatbelt pretensioners and provide added braking power.

Other options include an adaptive cruise control and a lane departure warning system, while systems like ABS with EBD and Electronic Stability and Traction Control are standard.