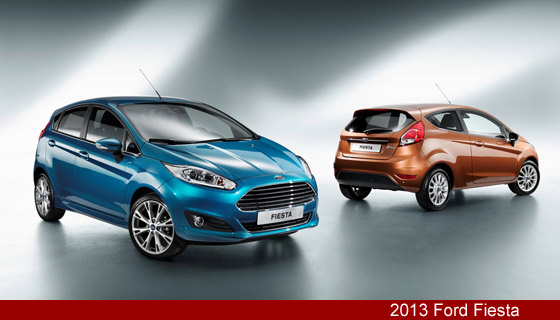 Here are the first images of the facelifted Ford Fiesta for European markets. The most interesting change for the redesigned Fiesta is the new 1.0-liter EcoBoost engine in its line-up. Its a three-cylinder unit, which has won the ???2012 International Engine of the Year??? award, and claimed to offer ???best-in-class??? fuel economy.

Ford didn’t release any further information regarding the output or the fuel economy and CO2 emissions of this poweplant, but more details will be released at the Paris Motor Show.

The exterior styling changes for the redesigned 2013 Fiesta concern the new front fascia with the Fusion/Mondeo/Aston Martin like grille with the chromed slats, the revamped headlamps with LED technology and the new bonnet design.

Inside, Ford made some changes to the switchgear to improve the car’s ergonomics.

“Fiesta has been one of the world’s best-loved small cars across five decades, and the sporty appeal of the last generation Fiesta inspired real passion among global compact car customers, contributing to its status as the world’s most successful small car,” said Martin Smith, Ford of Europe executive design director. “We had to keep that vital part of Fiesta’s make-up – but we also wanted to give it a more sophisticated look.”