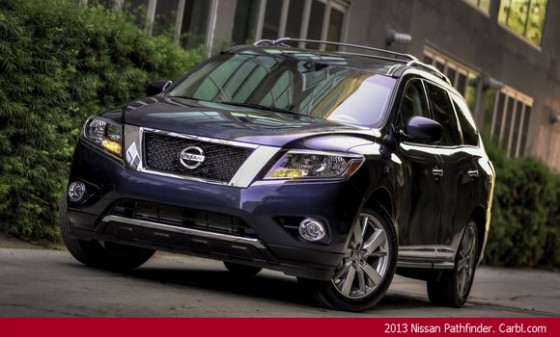 The 2013 Nissan Pathfinder SUV uses the same 3.5-liter V6 engine found in the new Infiniti JX, matched to a next-generation Xtronic CVT. In this application, the V6 produces 260-horsepower. The 2013 Pathfinder is offered in FWD and 4WD configurations, with the latter featuring ALL-MODE 4×4-i system with selectable 2WD, Auto or 4WD modes.

The Japanese carmaker claims that the new Pathfinder features a more upscale exterior and interior ??“ though for some reason, Nissan skimped on the pictures of the dashboard that we don’t get to see as a whole

Inside, it’s worth mentioning that the 2013 Pathfinder has room for seven passengers in three rows of seats equipped with the so-called “EZ Flex Seating System with LATCH AND GLIDE”, which the company says is an industry first 2nd row tip-up seat for use with a child safety seat.

The 2013 Pathfinder SUV will go on sale in the United States this fall. No word about pricing yet.