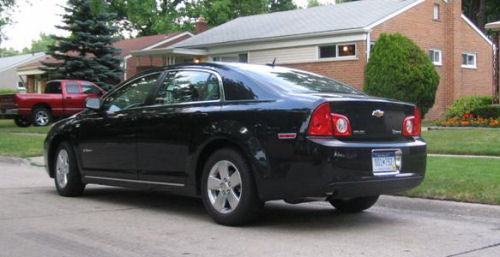 The Chevrolet Malibu Hybrid was caught in a metro Detroit neighborhood. Spy shots show a fender-mounted “Hybrid” badge identical to that used on other recent GM hybrids. The Chevrolet Malibu is expected to mirror the Saturn Aura Green Line hybrid, at least mechanically. And, if these photos are any indication, the Malibu and Green Line will have similar wheels. The Saturn features a 164 horsepower 2.4 liter four cylinder mated to a four-speed automatic. The Saturn gets 28 mpg in the city and 35 mpg on the highway.

No pricing has been announced on the Malibu Hybrid, but the Aura Green Line starts at $22,695.