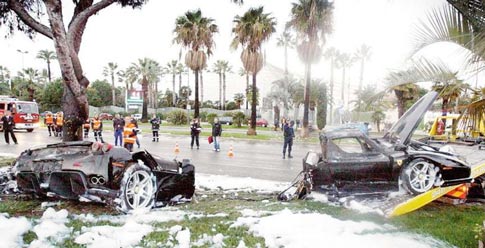 Another Ferrari Enzo destroyed in high-speed crash near Nice, France.
Russian billionaire Suleiman Kerimov was in critical condition this weekend after crashing his black Ferrari Enzo in Nice on the French Riviera. The car split in half after striking a tree, and subsequently burst into flames. His passenger, russian TV celebrity Tina Kandelaki (married 😉 ), without physical injuries.

The Roast of a Lamborghini Gallardo