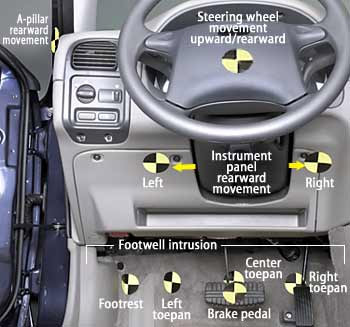 The Insurance Institute for Highway Safety (IIHS) released the results of it latest tests .

Front, side, and rear evaluations were conducted for all except the Optima, which was not tested for protection in side impacts. Kia is changing this car to improve its side performance, and the Institute will test it later this year.

Camry is a top performer in the side impact test. The Institute rates the risk of injury separately for the head, neck, torso, pelvis, and legs. Vehicle side structure also is rated. The Camry is good in all of these categories. For the 2007 model year, this car has standard curtain-style side airbags designed to protect people’s heads plus separate side airbags to protect the torsos of front-seat occupants.

Caliber improves compared with Neon: The Caliber replaces the Dodge Neon, one of the worst performing small cars in the Institute’s front and side tests. The Caliber is rated good overall for frontal crash protection, while the Neon was marginal. The Caliber also is improved in the side test.

Tucson improves too: Another vehicle to improve is the Hyundai Tucson, which also is sold as the Kia Sportage. High forces recorded on the dummy’s left leg and right leg and foot kept it from earning a good rating. This vehicle with standard side airbags also is acceptable in the side test.

Lincoln Zephyr isn’t competitive: This is the only luxury model tested this time around. It’s the only midsize luxury car rated acceptable for frontal crash protection.