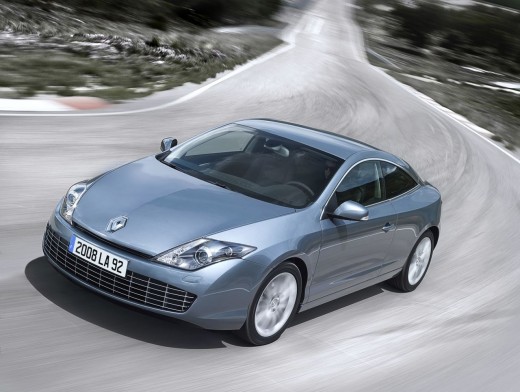 The new Renault Laguna Coupe was unveiled in Cannes. The new Laguna Coupe get a stylish new look and a pair of new V6 engines fueled by gasoline and diesel. The gas engine comes in at 3.5 liters and 240hp, and the diesel engine will be appearing under the hood of cars from Japanese partner Nissan in 2010. The 3.0L diesel V6 was shown last fall at the Frankfurt Motor Show, generates 235hp and 331 lb.-ft. of torque, and is expected to join the Nissan Maxima lineup. The front-wheel-drive Laguna coupe should have some interesting chassis dynamics thanks to its four wheel steering system.

Renault has chosen the glamorous weekend which sees the Cannes Film Festival coincide with the Monaco Formula 1 Grand Prix to take the wraps off Laguna Coupe. The flowing lines of the newcomer’s elegant, uncluttered design express timeless beauty and the promise of sheer motoring enjoyment. Its performance provides unprecedented pleasure behind the wheel thanks to the combination of its Active Drive chassis equipped with four-wheel steering which has been acclaimed by the media across Europe on the GT version of Renault Laguna and the two new V6 powerplants which have been introduced at the same time as this image-forging vehicle. The brand new V6 dCi, which is poised to become a benchmark in terms of performance and pleasure, delivers 235hp (173kW), while the new 3.5-litre petrol-powered V6 offers 240hp (175kW). Laguna Coupe stands out as an inspiring, four-seater with genuine sensual appeal and will be shown in further detail at the forthcoming Paris Motor Show in October.

Saturday May 24 saw Renault President Carlos Ghosn arrive at the foot of the illustrious steps of the 61st Festival International du Film de Cannes at the wheel of Renault Laguna Coupe. The occasion marked the first public showing of the new model’s definitive, distinctive lines and was a fitting way for the carmaker to celebrate the 25th anniversary of its exclusive partnership with the famous film festival. Renault Laguna Coupe also profited from the weekend to make a guest appearance around the track of the 66th Monaco Grand Prix to showcase its sporting credentials. Two Laguna Coupes completed several laps of Monaco’s legendary circuit in the hands of ING Renault F1 Team test drivers Lucas di Grassi and Romain Grosjean, providing the many thousands of spectators with a unique and unexpected show.

Renault Laguna Coupe bears a close resemblance to the racy concept car revealed at the Frankfurt Motor Show in September 2007, while its elegant styling and proportions boast all the hallmarks associated with truly exceptional coupes. Its distinctive front end suggests the presence under the bonnet of the finest Renault-Nissan Alliance engines which have been designed and developed to ensure supreme driving enjoyment. Indeed, Renault Laguna Coupe is capable of accelerating from standstill to 100kph in less than seven seconds, and this upper-range performance combines with the Active Drive chassis and four-wheel steering to deliver optimum pleasure at the wheel.

The flowing lines of Renault Laguna Coupe’s elegant, uncluttered design express a blend of timeless beauty and the promise of sheer motoring enjoyment. There is no mistaking the legacy it has inherited from the show car unveiled at the Frankfurt Motor Show in September 2007 and from the Renault Laguna range at the top of which it is destined to preside. With a length of 4.64 metres and a width of 1.83 metres, its proportions are nicely balanced, while the character line which stems from the grille rises forcefully along its flanks, like a wave of air, gracefully underpinning the design of its front wings before extending rearwards to highlight its muscular haunches. The glazed area of its windows is shown off to its best advantage by a pure, flowing arc. Sitting on its 17- or 18-inch aluminium alloy wheels, Laguna Coupe’s stance exudes a sense of dynamism and power thanks to a wheelbase dimension of 2.69m and a height of 1.40m. This sensation is echoed by the pronounced crease-lines of its long bonnet and by its new variant headlamps. The rear, meanwhile, features a very short overhang and broad, slim lights which give Laguna Coupe a bright, distinctive lighting signature which suggests refinement and power, especially at night when the indicators form a halo that picks out the contours of the thin red LEDs.

Four-wheel steering for an exceptional ride

Developed jointly by Renault Engineering and specialists from Renault Sport Technologies, Laguna Coupe’s technologically-advanced chassis guarantees the ultimate in dynamic performance. Its outstanding agility and stability set new standards when it comes to safety and surefooted handling, while the new car corners with unrivalled directional precision as if it were on rails. Following its introduction on the GT version of Renault Laguna, this chassis has naturally been carried over to Laguna Coupe and is particularly suited to being powered by the new car’s V6 engines. At low speeds, the Active Drive chassis and four-wheel steering system enhance manoeuvrability and it takes drivers no time at all to familiarize themselves with their characteristics. In town, as well as on twisty roads, the car is easy to drive and offers outstanding handling precision. It makes choosing the optimal cornering line intuitive and further enhances the pleasure experienced behind Renault Laguna Coupe’s wheel, a feeling reinforced by the absence of transient dynamic phenomena through turns and by its directional precision at small low steering wheel angles. On the active safety front, the Active Drive chassis equipped with four-wheel steering excels not only under braking in difficult conditions (asymmetric grip, deployment of ESP), but also when taking avoidance action (the so-called ‘elk test’).