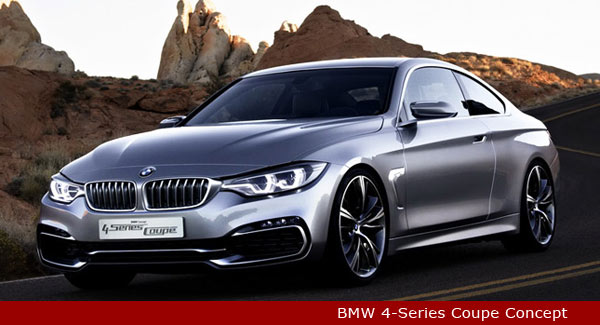 BMW’s new 4-Series Coupe Concept officially unveiled. Now you can see the first pictures of the hot concept that will make its debut at the upcoming Detroit Motor Show. The new 4-Series measures 4,641 mm long, 1,826 mm wide and 1,362 mm tall, which means it’s longer, broader and lower than the current 3-Series Coupe.

In profile, the 4-Series retains the 3-Series ‘double swage line’, while the so-called “Air Breather”, an aerodynamic aperture behind the front wheels, reduces drag around the wheels – which, in the case of the concept, are 20-inch multi-spoke alloys.

The design of the rear bumper is quite striking, mimicking the three-way split of the front bumper and incorporating the exhaust pipes in each of its outer edges – though it remains to be seen whether this will make it into the production car.

The interior is also production-ready, with the driver-centric dashboard being borrowed straight from the 3-Series Sedan and Touring models. Of course, the doors are longer than the saloon’s and their trim panels converge, according to BMW, via the B-pillar into the rear connecting the two passenger compartments.

When the production model is launched it will be powered by the BMW’s new TwinPower units, with the range-topping M4 switching from a naturally aspirated V8 to a turbocharged in-line six.