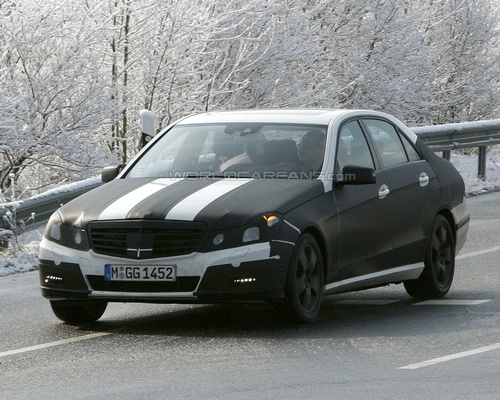 The spy photographer caught a prototype of the codenamed W212 project close to test base at the Nurburgring.

For the 2010 model year the Mercedes E-Class is likely to drop its Sensotronic Brake Control (SBC) in favour of a conventional brake system with high-tech features such as wet-weather disc wiping and wheel-selective cornering brake control.

The new E-class design will mimic the S-class’ wheel-arch extensions, rising character line below the door handles and big bumpers. Other features will include a more sculpted wide-frame grille and geometric air intakes in the front fascia. Some say the front headlights and c-pillar treatment is heavily influenced by the latest Lexus models, which is rather ironic since Lexus was famous for ‘borrowing’ design cues from Mercedes in the past. We expect that the 2009 Frankfurt Motor Show will reveal all.