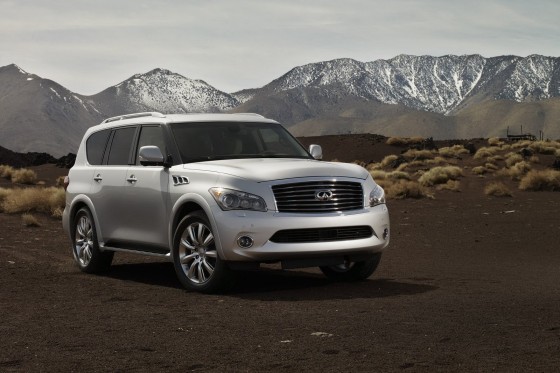 The all-new 2011 Infiniti QX56 full-size SUV has been unveiled today at the New York International Auto Show. The second-generation Infiniti QX is based on the already revealed 2011 Nissan Patrol. Infiniti’s SUV features a unique front and end treatment, but the rest of the body has remained unchanged.

The new QX features revised dimensions versus the previous model as it is 1.4-inches longer, 1.1-inches wider and 3.8-inches lower in overall height.

“If you could take the interior of a private jet and transform it into a full-size SUV, this wouldn’t be far off,” said Ben Poore, vice president, Infiniti Business Unit. “From its available sofa-like semi-aniline leather seating to its premium audio and three-source entertainment systems, the QX interior is world-class. It’s a highly adaptive environment, with a quality and quietness that adds to the stress-free driving and riding experience.”

The new QX features standard 7-passenger seating capacity, with 8-passenger capacity available with the 2nd row 60/40-split folding bench seat. Also available is a remote release for the 2nd row seats to activate the tip-up function through a switch on the center stack. The 3rd row seat is a 60/40-split power folding design with reclining capability.

The 2011 2011 QX56 is powered by a new 5.6-liter V8 engine with direct-injection technology that’s rated at 400 horsepower and 413 lb-ft of torque. Despite the 25% increase in horsepower over the previous QX, Infiniti claims that the new model is more than 10% more fuel efficient.

The V8 unit is hooked up to a standard 7-speed automatic transmission with Adaptive Shift Control (ASC) and manual shift mode with Downshift Rev Match.

The QX is offered in two-wheel drive and four-wheel drive, with the 4WD model featuring Infiniti’s All-Mode 4WD system with Auto, 4H, and 4L modes. The system can transfer up to 50 per cent of torque to the front wheels on demand. 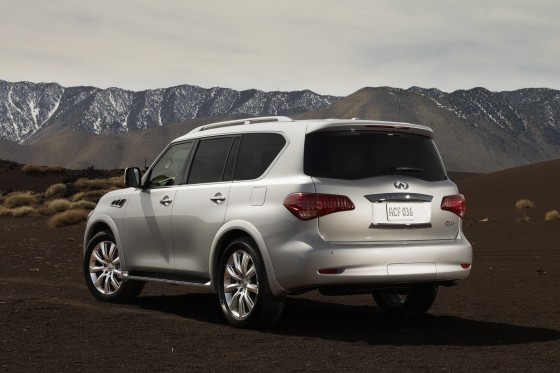