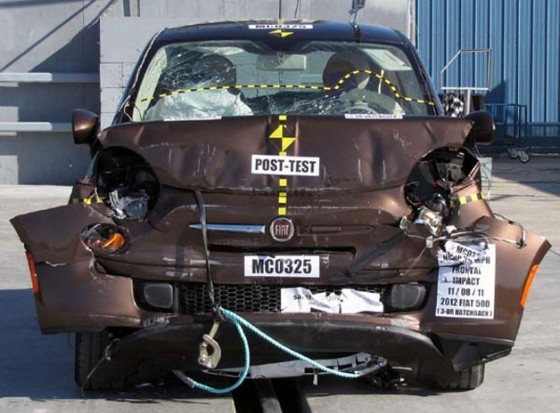 The 2012 Toyota Camry and 2012 Cadillac CTS have earned the five-star safety rating from the National Highway Traffic Safety Administration. Last year, the 2011 Camry took home four stars in the evaluations. Toyota reminds us that the 2012 Camry is built with high-strength steel to help protect the passenger cell against deflection in the event of an accident, and that the vehicle comes standard with 10 airbags, all of which contribute to the new model’s superior score.

The Fiat 500 didn’t fare so well under the range of crash evaluations. The small hatch earned just three stars. The side-impact test was particularly cruel to the Fiat 500, with NHTSA awarding the vehicle two stars in that category – a somewhat surprising result considering that Fiat went to the trouble of redesigning the 500 for U.S. crash test compatibility. The Dodge Caliber and outgoing Ford Escape also received the three-star designation.