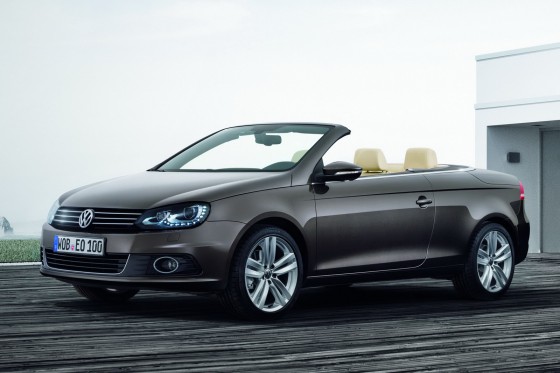 Volkswagen is unveiling its Eos coupe-cabriolet facelift. The fupdated Eos, which will have its premiere at the Los Angeles Auto Show in late November, receives an updated design and a some new features.

The exterior facelift brings the Eos in line with VW’s latest models such as the new Touareg, Passat B7 and Jetta. At the front, there’s a new upper grille which is now completely separated from the lower. The new Eos get new headlamps that incorporate horse-shoe shaped LED running lights, the bumper design and the more chiseled side mirrors.

Out back, the makeover include a revised bumper housing a diffuser and new, rectangular-shaped tail lamps with LED technology.

Inside, the changes are really rather difficult to spot, being limited to some fresh colors, new controls for the air conditioning system, the keyless locking and starting system, a new multi-function color display and the remote control for the retractable hardtop.