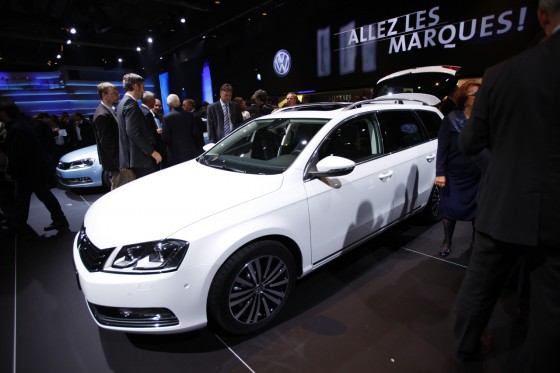 Volkswagen has unveiled its new Passat at first day of Paris Motor Show. It’s received the new corporate design and intended for an older demographic and the styling seems to reflect that.

A full range of engines will be available later this year. In North America a new Passat will receive the 207-horsepower, 2.0-liter turbocharged four-cylinder as well as the 296-horsepower, 3.6-liter V6. All engines can be mated to either a six-speed manual or dual-clutch automatic gearbox, and 4Motion all-wheel drive should be available on top-end models.

The 2011 Volkswagen Passat will also be available with XDS electronic differential. This system helps reduce understeer and improve overall traction in slippery conditions. 2011 Volkswagen Passat gets a new optional city emergency braking function automatically stops the car at speeds below 18 miles per hour when an imminent collision is detected.

The 2011 Volkswagen Passat goes on sale in the United Kingdom this October and VW plans to announce North American availability in the very near future.