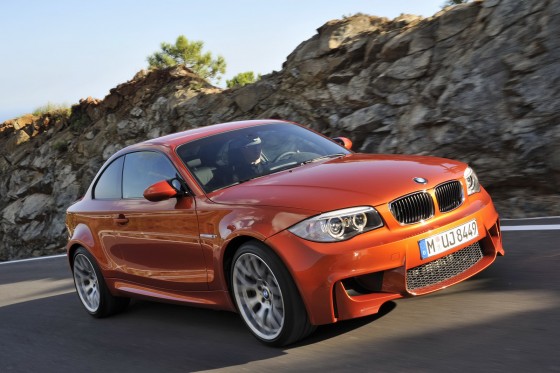 The new BMW 1 Series M Coupe was revealed today. The reason why BMW went for the somewhat awkward sounding 1-Series M Coupe moniker, is to avoid any confusions with the legendary M1. The smallest and most economically priced model of the M family is based on the 135i Coupe.

The BMW 1-Series M Coupe will be offered exclusively with a close ratio 6-speed manual transmission driving the rear wheels through a variable M differential lock. BMW claims the M Coupe will complete the sprint from a standstill to 60 mph [96km/h] in just 4.7 seconds (0-100 kmh in 4.9 seconds), and the standing quarter-mile in 13.2 seconds. Top speed is limited electronically to 155 mph (250 kmh).

The 2012 BMW 1-Series M Coupe features new aluminum suspension parts sourced from the M3 as well as a more powerful braking system with internally-vented, cross-drilled cast iron discs measuring 14.2 inches in diameter at the front and 13.8 inches in the rear.

BMW said the 2011 1 Series M Coupe will be available in limited quantities starting from Spring of 2011, adding that final pricing, packages, and options will be announced closer to the on-sale date.