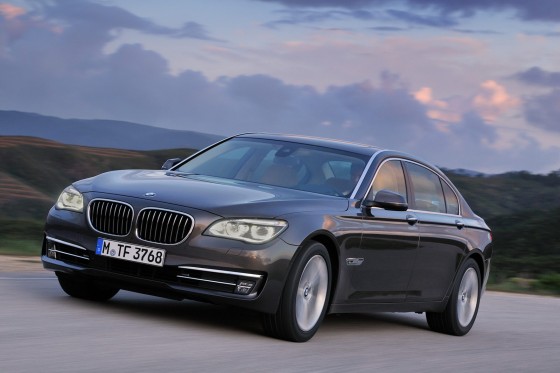 Great news for BMW fans: Bavarian automaker is facelifting its 7-Series sedan for the 2013 model year. What’s new? On the outside, facelifted 7-Series gets the new LED headlamps with corona rings, which are accompanied by the modified grille with nine slats instead of the previous 12, a revised front bumper, new indicators under the mirrors and a thin chrome strip connecting the two slim reflectors.

Under the hood, BMW has introduced a new diesel engine and revised the rest of the lineup. It’s a new 3.0-liter tri-turbocharged inline-six diesel. In the all-wheel drive 750d xDrive, the diesel unit is rated at 375hp allowing for a zero to 100km/h acceleration time of only 4.9 seconds and a limited top speed of 250km/h.

The older V8-powered ActiveHybrid7 may have been faster completing the sprint in 4.9 seconds, but it was also less efficient with an average fuel consumption of 9.4 lt/ 100 km.

All new 7-Series models get new suspension bits including a self-leveling, rear air-suspension as standard. In the U.S., BMW will offer the gasoline units 740i/Li, 750i/Li, 760i/Li and the ActiveHybrid7 with sales scheduled to start later in the summer.