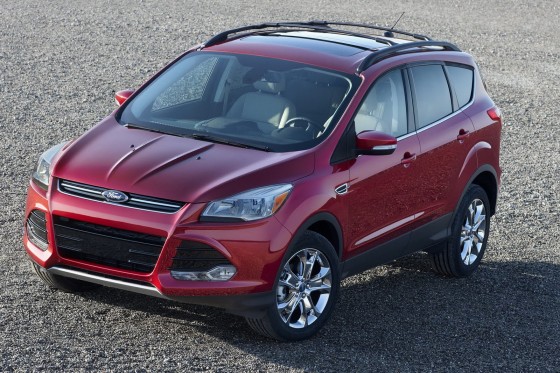 Ford today unveiled its new compact crossover, called Escape (Kuga in Europe). The new Ford Escape is more modern than the model it replaces. Ford’s design boss, Martin Smith, say: “The Escape’s athletic good looks are no accident, we wanted to create the impression of an athlete like a runner or swimmer in the new body – right down to the defined muscles that convey movement and energy.”

In the U.S. market, it will be available in both front- and four-wheel layouts with three gasoline engines, and will combined with a six-speed automatic transmission.

The base engine is a 2.5-liter four cylinder unit delivering 168HP. This version will only be available with front-wheel drive. Next unit is the turbocharged 1.6-liter EcoBoost inline four with 173HP will be offered in FWD and AWD versions.

The top model is powered by the turbocharged 2.0-liter Ecoboost that produces an output of 237HP and like the 1.6, it will also be available in FWD and AWD versions.

The interior of the 2013 Escape is similar to that of the new Focus with the vertical center vents surrounding the infotainment system’s screen.

Ford claims to offer technologies that are not available in any other rival including the Sync infotainment system that sports the upgraded MyFord Touch driver connect technology. Other features available are a hands-free power liftgate that uses a motion sensor placed under the rear bumper, an active parking assist and a blind-spot information system to warn the driver about objects in the vehicle’s blind spots.