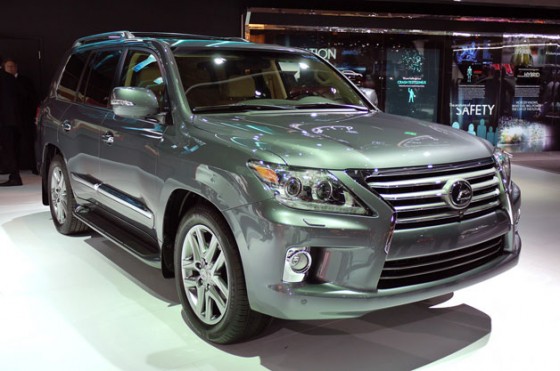 A new Lexus LX 570 price increased to $82k. The Lexus LX 570, a luxury version of the Toyota Land Cruiser, gets spindle grille and it has revised front and rear fascias among the other upgrades that Lexus says justify its 1.9-percent price increase.

The Lexus LX 570 also got an updated Crawl Control mode and terrain-select for the all-wheel-drive system, a new multimedia system with the next-generation Lexus Enform system. There’s also a $1,510 luxury package that adds some higher grade trim and features, and a backseat entertainment system for $2,005.

Toyota only sold 3,167 units of the Lexus LX last year, down by about 20 percent.

Lexus today announced the Manufacturer’s Suggested Retail Price (MSRP) for the 2013 LX 570 luxury utility vehicle, which will arrive at dealerships in early February with bold new styling, interior enhancements, cutting-edge technology and remarkable off-road capabilities. The LX will carry an MSRP of $80,930, an increase of 1.9 percent or $1,475. The MSRP does not include a delivery, processing and handling fee of $875.

“With all of the enhanced features, the LX 570 offers perhaps the most exciting combination of luxury, on-road smoothness and off-road performance of any vehicle in its segment,” said Mark Templin, group vice president and general manager, Lexus Division.

The 2013 LX 570 gets a new look at both the front and rear. The fresh look is highlighted by the Lexus spindle grille. New LED daytime running lights complement an updated headlamp design with new larger fog lamp bezels. Taillamps are also updated, while the rear license plate surround gets a revised look and the tow hitch cover is more integrated. Both front and rear bumpers are refreshed, with the rear bumper protector enhanced by a chrome accent. Turn signals have been integrated into the side mirrors, and wider bodyside moldings sport a new appearance.

The LX 570 is powered by an advanced 5.7-liter V8, four cams, and four valves per cylinder engine with dual Variable Valve Timing with intelligence (VVT-i). At 383 horsepower and 403 lb.-ft. of torque it is built to handle demanding tasks with remarkable smoothness.

The LX receives an updated Crawl Control feature which provides optimum throttle and brake modulation when maneuvering over rough, uneven or difficult surfaces. The new Turn Assist feature tightens turning circles by adding more brake force to the inside rear wheel. The new Multi-terrain Select also allows the driver to optimize performance by choosing from five types of terrain settings.

With the standard navigation system, LX owners can enjoy a high-resolution multi-media display. The high-resolution screen supports an enhanced map display, with audio, climate and other vehicle information. The navigation system will also have access to the next-generation Lexus Enform Application Suite, the system that leverages the customers’ mobile phone technology to provide a new level of connectivity and information management. Users can conduct local searches through Bing, utilize voice-enabled apps to make restaurant reservations through OpenTable, purchase movie tickets via MovieTickets.com or tap into internet radio services, including Pandora or iHeartRadio.

In addition to the Luxury Package, the new LX 570 features an available dual screen rear-seat entertainment system with wireless headphones and three-prong electrical outlet, priced at $2,005. This system allows two video sources to be viewed at the same time – for instance, one can be used as a DVD player while the other as a game console or audio player.