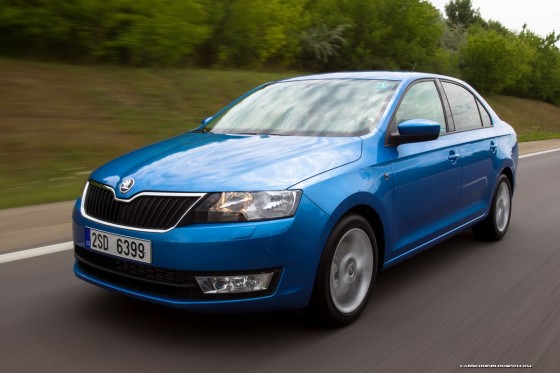 Today here are first official photos and video of the new Skoda Rapid sedan. The Czech model, as her sister the Seat Toledo, made on an extended version of the VW Polo’s platform. Skoda said that despite the car’s compact dimensions, it will “comfortably seat up to five persons” providing ample luggage space.

The new 2013 Skoda Rapid is equipped with a tailgate that lifts together with the rear window has a capacious boot space of 550 litres. The car that closes the gap between the Fabia supermini and the Octavia will hit European showrooms this fall after its debut at the Paris Motor Show.

The two diesels are a 1.6 litre unit with direct common rail injection and a particulate matter filter with 89hp that is scheduled for launch in the second half of 2013, and the 1.6-liter TDI CR with 104hp. Both of these diesel engines will be offered with an optional seven-speed DSG double-clutch transmission.

Skoda Begins Production of 2013 Octavia with Sales Start in January