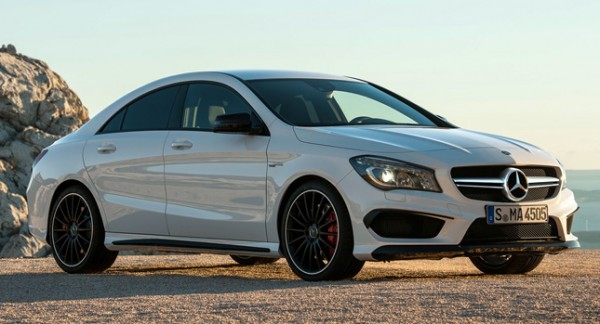 German luxury carmaker is ready to meet the 2013 New York International Auto Show. Today Mercedes-Benz has unveiled its four-door AMG coupe, the CLA 45 AMG. The CLA 45 AMG comes with the same powerplant from the A 45 AMG hatchbak, a 2.0-liter turbocharged unit that develops 355-horses (360PS) and 450 Nm (332 lb-ft) of torque.

As with the eight- and twelve-cylinder engines, the new AMG four-cylinder turbo engine is hand-built according to the traditional AMG philosophy of “one man, one engine”. The unit is paired to a dual-clutch 7-speed AMG SPEEDSHIFT DCT 7 gearbox, whose software modules have been adopted from the flagship SLS AMG supercar.

The transmission enables the driver to activate manual mode M without having to remove a hand from the steering wheel, simply by pressing the up or down shift paddle once. There’s also an “S” sport mode and a Controlled Efficiency mode ‘C’ which favors fuel consumption over performance. The latter automatically activates the ECO start/stop function.

Aesthetically, the CLA 45 AMG uses a similar aero kit as the A 45 AMG, although Mercedes notes the car???s resemblance with the CLS 63 AMG. They’re obviously talking about the profile and the rear end, which could be mistaken for its larger and more expensive brother due to the similar taillights and raked rear window.

On the inside, everything is just like in the A 45 AMG, with an identical dashboard, sport seats and an array of features available.

The CLA 45 AMG will go on sale in July 2013 in Germany, with market launch scheduled for September. Prices there start from $71,981, while in the US, the CLA 45 AMG will be priced from a much more competitive $47,450 with sales to start this spring.