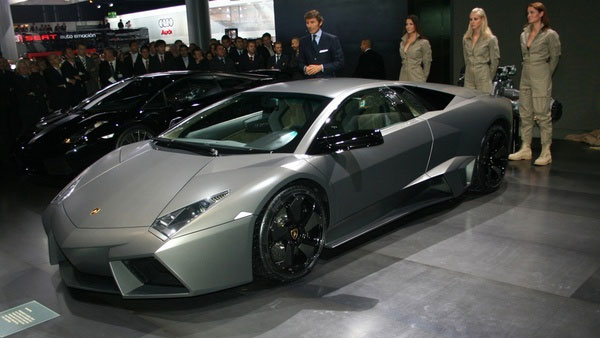 Press Release: The most extreme

The essence of the marque: just 20 examples of a design masterpiece

Clearly a Lamborghini, but nothing quite like it. A super car without equals: the Lamborghini Reventon is a road vehicle with an extreme specification and, at the same time, a limited edition masterpiece – a coherent style, angular with sharp lines, inspired by the very latest aeronautics.

With just 20 produced, each 1 Million Euro (without taxes) Lamborghini Reventon is a symbol of extreme exclusivity, yet still offering the extraordinary performance that makes the Reventon so unrivalled: under the completely autonomous design, the Reventon possesses the entire technical and dynamic competence of the twelve cylinder Lamborghini.

Lamborghini prides itself on being the extraordinary manufacturer of extreme super sports cars without compromise. Sensuality and provocation characterise every Lamborghini, with an aggressively innovative style. “However, the Reventon is the most extreme of all, a true automotive superlative. Our designers at the Lamborghini Style Centre took the technical base of the Murcilago LP640 and compressed and intensified its DNA, its genetic code,” affirms Stephan Winkelmann, President and CEO of Automobili Lamborghini S.p.A.

The Lamborghini Reventon has been entirely designed in Sant’Agata Bolognese, the original birthplace of the Lamborghini and the native home of every super car born under the sign of the bull. The design drawn up in Lamborghini’s Centro Stile (Style Centre) is fine-tuned in close collaboration with the Lamborghini Research and Development Department. Thus, the Reventon is not only “haute couture” but it also stands out for its elevated dynamism whilst being entirely suitable for every day use.

The Lamborghini Reventon is not destined to remain a one-off. A total of 20 Lamborghini friends and collectors will be able to own this extraordinary car and, naturally, enjoy the incomparable pleasure of driving it.

The name Reventon has been chosen according to Lamborghini tradition. Reventon was a fighting bull, owned by the Don Rodriguez family. It is included in the list of the most famous bulls ever and is known for killing the famed bullfighter Felix Guzman in 1943.

Inspired by the fastest airplanes

The present day Lamborghini models are distinguished by the clear language of their shape. The coherent proportions of the Murci??lago and Gallardo highlight their power and dynamism. Sharp edges, precise lines and clean surfaces: these are ingredients of a style reduced to the essential. Each element is created exactly according to its function; ornaments and decorations are totally foreign to a Lamborghini.

With the Reventon the Centro Stile designers have coherently developed this philosophy, inspired by another sphere where speed and dynamism reign absolute: modern aeronautics, responsible for the fastest and most agile airplanes in the world. This has created an extremely precise, technically striking style with a new vitality: interrupted lines and contorted surfaces create a fascinating play of light, giving the car incredible movement.

Made of carbon fibre and precision

Although it is based on the extraordinarily successful Murcilago LP640, the exterior design of the Reventon is completely new. Just like the base model, the exterior is made of CFC, a composite carbon fibre material, which is as stable as it is light. The exterior components are glued and fixed to the body comprised of CFC and steel.

The front is characterised by the acute angle of the central ‘arrow’ and by the powerful forward-facing air intakes. Although they do not supply air directly to the turbine like an airplane, bearing in mind the 650 hp, an abundant volume of air is necessary to cool the carbon brake disks and the six cylinder callipers.

Naturally, both doors on the Reventon open upwards – since the legendary Countach this has also been a symbol of the V12 Lamborghini product line. With their asymmetric configuration, the large air intakes below the doors provide an example of the extreme coherence with which a Lamborghini fulfils its function: on the driver’s side it is large to increase the flow of oil to the radiator. On the passenger’s side of the vehicle, the air intake is flat because in this case, it only has to ensure the flow below the floor. The aerodynamically optimised flat floor structure terminates at the rear with a diffuser featuring an accentuated shape. This guarantees excellent road grip and stability even at 340 km per hour.

In spite of the extreme and innovative language of its shape, the Reventon not only maintains all the strong features of the Murcilago LP640, but also offers further amelioration in terms of aerodynamics, the important engine cooling system, the air intake system and brakes. The airflow and the section of the variable geometry air intakes of the engine and the rear spoiler (also adjustable) have been modified.
Owners of the 20 examples will be able to test the performance of his or her Lamborghini in person.

Perfected to the ultimate detail

The engine hood made of glass laminate with open ventilation slits offers a glimpse of the beating heart of the twelve cylinders of the super car. The glass also features the marked arrow angle that characterises the design from the front to the rear spoiler. The Lamborghini designers’ love for detail is beautifully illustrated by the fuel tank lid: a small mechanical work of art, achieved by milling a solid aluminium block.

The combination lights transform the incisiveness of the design into light: the front features the most modern light-emitting diodes alongside Bi-Xenon headlights. Seven LEDs ensure continuous daylight while there are a further nine diodes for the indicator and hazard lights. Another technical innovation is found in the rear light LEDs. Because of the high temperature in the rear low part of the car, special heatproof LEDs are used for the indicator and hazard lights, stoplights and rear lights with a triple arrow optical effect.

Naturally, such a refined language of shape also demands an extraordinary colour. For the 20 examples of the Revent??n, the designers from Sant’Agata Bolognese have created a totally new hue: Revent??n, a mid opaque green/grey without the usual shine. However, thanks to the metallic particles, in the daylight this colour tone features surprising depth.

Opaque and brilliant colours for the wheel rims
This play of opaque and lustre is also featured on the wheel rims, especially created for the Revent??n. Opaque carbon fins are screwed onto the black aluminium spokes, not only creating a visual effect with the precision of a surgeon’s scalpel, but a turbine effect also ensures optimum cooling for the powerful ceramic brake disks.

TFT display similar to an airplane

The same innovative force applied to the exterior design characterises the cockpit of the Reventon. Designed and created using Alcantara, carbon, aluminium and leather that comply with the top quality standards, the interior is inspired by the next generation cockpits: just like in modern airplanes, the instruments comprise three TFT liquid crystal displays with innovative display modes. At the touch of a button, the driver can choose from two vehicle information display modes. The instruments are housed in a structure milled from a solid aluminium block, protected by a carbon fibre casing.

The G-Force-Meter is also completely new: this display shows the dynamic drive forces, longitudinal acceleration during acceleration and braking, as well as transversal acceleration around bends. These forces are represented by the movement of an indicator on a graduated 3D grid depending on the direction and intensity of the acceleration. A similar instrument can be found in the airplanes. Formula One teams also use a similar device to analyse dynamic forces.

The instrument on the left of the speedometer associates the number of revolutions in the form of a luminous column with the display of the selected gear. Finally, every Reventon is equipped with a robotised e.gear controlled by two small levers under the steering wheel.

By simply pressing a button, the driver can switch to the second, quasi-analogical display, where the classic circular instruments, speedometer and engine speed indicator are configured in an equally innovative way and transformed into luminous pilot lamps with varying colours. The G-Force-Meter naturally remains at the centre in this display mode.

All this is possible thanks to the fact that the entire electronic platform of the Reventon, together with all the control devices, has been autonomously developed by the Lamborghini experts.

The same process for integrating the electronic displays in the car was applied to the Lamborghini Engineering Department.

From the conception of the very first radical ideas, the entire Reventon has been developed in Sant’Agata Bolognese thanks to tight teams of remarkably creative experts. An extremely refined and efficient process was employed: CAD design and development, creation of the prototype in the Prototype Department, all carried out under the constant supervision of the Research and Development Department’s technicians and testers.

Atelier of creativity and high efficiency

Inaugurated in 2004, the Centro Stile is dedicated to design and characterised by a high degree of efficiency: an “atelier” of creators, designers and prototype constructors, who encapsulate the Lamborghini culture and spirit by using their remarkable skills to create aesthetic innovation.

The Centro Stile is located in a 2,900 square two-storey building. The large pavilion houses two test floors and related production and analysis equipment, while other rooms are set aside for the most advanced computerised workstations for designers and a style-model construction workshop. The Centro Stile is also closely linked to the nearby Engineering Department: the direct line between the Lamborghini development departments guarantees that ideas rapidly become reality.

Creativity and production under the same roof

The Lamborghini Revent??n is a practical illustration of the streamlined functionality and efficiency characterising the Centro Stile: it took less than a year to progress from the first ideas to the finished car. The complete design process from the first sketches on paper, to three dimensional computer models with 1:10 or 1:4 scale, right up to the real size prototype is organised around streamlined, fast, efficient work groups. Thanks to the Centro Stile, for the first time in its history, Lamborghini is now able to create its own style philosophy in-house without having to rely on any external collaboration.

The 20 units will be manufactured in Sant’Agata, using a production process characterised by artisan perfection and rigorous quality standards.

A masterpiece with tested technology

The technology found in the Murcilago LP640 has not been modified. The engine in the LP640 forwards is the classic twelve-cylinder engine with 6.5 litre displacement. Only for this car, Lamborghini guarantees, an astounding 650 HP (478 kW) at 8,000 revolutions per minute (rpm). The huge torque, equal to maximum 660 Nm, ensures a powerful switch from any number of revolutions: even the slightest pressure on the accelerator is spontaneously transformed into thrust. The robotised e.gear changes gear faster than even the most expert driver. In addition, the permanent Viscous Traction four-wheel drive system ensures that every force is constantly translated into movement.

Born to become a legend

Since its foundation, Lamborghini has been a creator of trends in the world of sports cars and has always manufactured cars with an absolutely unmistakable character. Models such as the Miura or Countach, for example, were veritable forerunners and rapidly acquired the status of timeless classic cars. From the moment they are launched, every new Lamborghini promises to become a legend, destined to become a sought-after and precious possession.

With the Lamborghini Reventon, Lamborghini has done it again; it has created an unequalled super car; the perfect synthesis between the exclusivity and appeal of a limited edition design masterpiece, and the dynamism and driveability of a standard sports car. Thus, the Lamborghini legend is further enhanced by another, stylish future classic.

Such passion for hotels and cruises is shared by people who love to travel a lot. The apartments and cars are not so popular with them.