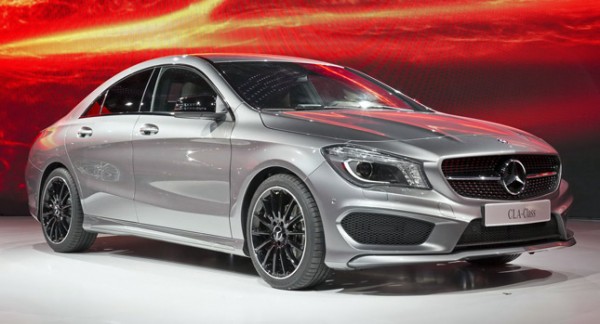 Here are the first official pictures of a German luxury four-door sports sedan based on the A-Class MFA front-wheel drive platform, called CLA. The new CLA may be equipped with the 4MATIC all-wheel drive system being available as an option and it will launch with a 207HP turbocharged 2.0-liter four-banger in the U.S. and a wider range of gasoline and diesel engines in Europe and other markets.

The CLA 180 BlueEFFICIENCY edition is even more aerodynamic, boasting a Cd of just 0.22 thanks to numerous modifications that include low-drag wheel trims, serrated wheel spoilers on the wheel arches, extensive underbody paneling and a new rear silencer followed by an air-flow optimizing diffuser.

The range-topper is the Mercedes-Benz CLA 250 that features a 2.0-liter turbocharged four-cylinder with an output of 208HP and 350Nm of torque. That’s good enough for a 0-62 mph acceleration time and a 150 mph top speed. Its price in Germany is US$51,686, in euros, of course.

In Europe, the CLA is already available to order and sales will begin in April, with the exception of the CLA 180 BlueEFFICIENCY that will join the range in June. U.S. sales of the CLA 250 will start in September with prices to be announced.