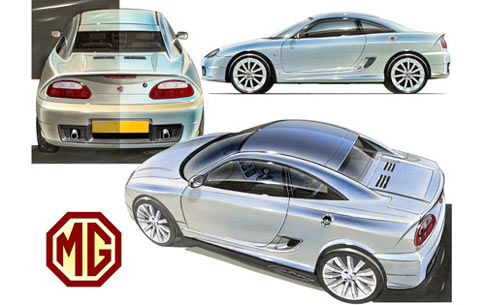 The president of MG Motors North America/Europe, Duke Hale, was interviewed about Nanjing Automobile’s plans for the MG brand, both in the U.S. and in Europe.

Highlights of the interview include:

– the manufacturing/R&D facility in Oklahoma is definitely going ahead
– Nanjing will build three MG sedan models in China
– MG Motors will build a modified version of the MG TF roadster in the U.K., and a coupe variant (artists concept pictured) of the roadster in Oklahoma
– the MG TF roadster will (re-)launch first in the U.K., then Europe, in mid-2007, followed by a U.S. launch in mid-2008
– the MG TF coupe will debut in 2008
– watch for a MINI-like campaign to revive the MG brand image in the U.S.
– MG Motors plans 300-350 dealers in the U.S.