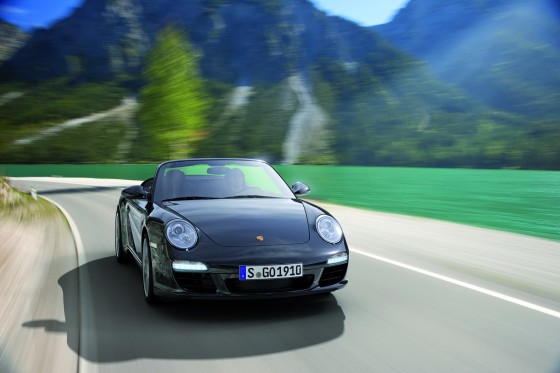 Porsche’s new special edition is based on the entry-level 911 Carrera Coupe and Convertible models boasting a black theme, and adding numerous extras and features. Production will be limited to just 1,911 examples worldwide with sales to start around April.

Porsche 911 Carrera Black Editions are painted in plain black, with Basalt Black metallic available as an option, while the folding hood of the Cabriolet model is trimmed in black cloth. Other styling highlights include the 19-inch 911 Turbo II forged alloy wheels with a glossy black trim and the black-finished, four-piston aluminium monobloc fixed brake callipers.

Inside, the cars get a black leather interior, a SportDesign steering wheel and a numbered plaque on the glove compartment lid, while the decorative fascia strip, gear lever and air vents are all finished in aluminium-look paint.

Power for both body styles comes from the standard Carrera 3.6-liter flat-six cylinder engine, producing 345-horse. Coupled with the six-speed gearbox, this output delivers a top speed of 289km/h (180 mph). Acceleration from 0 to 100km/h (62 mph) comes in 4.9 seconds for the Coupe and 5.1 seconds for the Convertible.