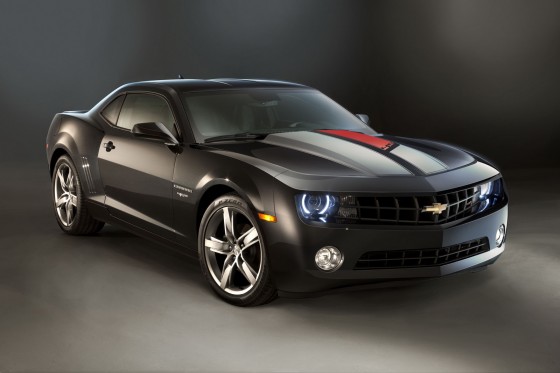 Chevrolet has unveiled its special Camaro for celebrating the iconic car’s 45th anniversary. The 3.6-liter V6 engine has been upgraded to 323 hp, an increase of 11 horsepower over the 2011 engine. The new engine is 20.5 pounds (9.3 kg) lighter and benefits from a thorough rework, including new cylinder head design, new fuel pump and optimized-flow fuel injectors, among other changes.

2012 Camaro SS coupes will be available with a new FE4 sport suspension, which improves handling.

The interior concern the revamped instrument panel with different graphics and trim, a new steering wheel design and a power lift feature for the passenger seat.

A new added feature is the Rear Vision Package, which consists of a rearview camera system. On the outside, the new Camaro gets a new rear spoiler and the RS appearance taillamps as standard.

Chevrolet will also launch a 45th Anniversary Special Edition Camaro. This package will be offered on the top two trim levels (2LT and 2SS). Special edition Camaros carry over all the 2012 upgrades and feature a unique rally stripe in red and silver painted over the Carbon Flash Metallic paint.