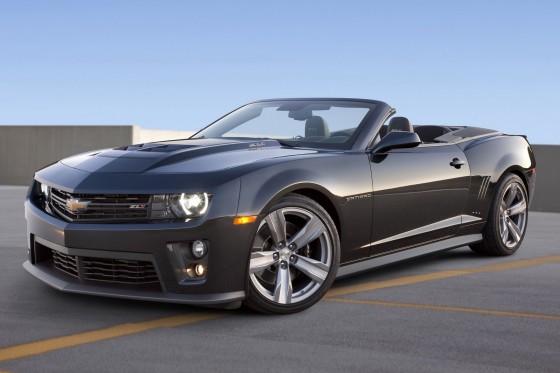 General Motors unveiled a new photos of its roofless all-new 2013 Chevrolet Camaro ZL1 Convertible. The new soft-top Camaro is scheduled to go on sale in late 2012 and will made a world premier at the Los Angeles Auto Show in November. The most interested in the new Camaro is 6.2-liter supercharged LSA V8 engine rated at 580 horsepower and 556 lb.-ft. of peak torque.

“The Camaro ZL1 convertible will be one of the most powerful and most capable, convertibles available at any price,” said Al Oppenheiser, Camaro chief engineer. “This is a car that is guaranteed to put a smile on your face every time you drop the top – or hit the gas.”

The GM made some structural reinforcements to improve noise and vibration characteristics, and reduce ride and body motions. These include: a hydrofoamed tube in the A-pillars, an inner reinforcement bracket in the windshield header, a reinforced front hinge pillar and reinforcements inside the rockers.

To compensate for the convertible’s lack of a unifying roof structure, GM’s engineers added tower-to-tower brace under the hood, a transmission support reinforcement brace, an underbody tunnel brace, a front X brace and stiffer cradle as well as rear underbody V braces.

We expect more details to be released before the Los Angeles Auto Show will start.