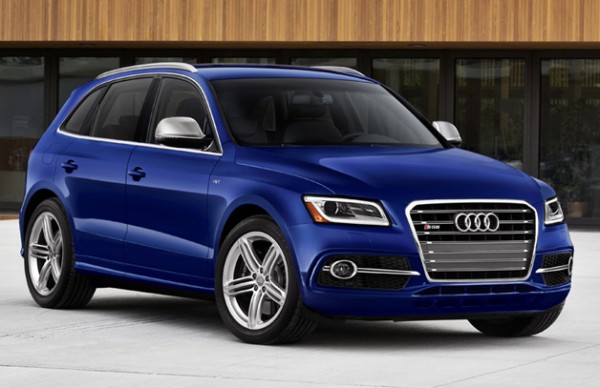 Audi unveils its SQ5 with 354-hp gasoline engine in the U.S. American version SQ5 loses some torque but gains plenty of horsepower with Audi quoting power ratings of 354 horsepower and 346 lb-ft from the supercharged 3.0-liter V6. Power is fed through an eight-speed automatic to all four wheels giving the small CUV impressive performance numbers. The 0-60 mile per hour time is expected to be in the low five second range to go with an electronically limited top speed of 155 miles per hour. The suspension has been upgraded as well to improve handling, but it also gives the SQ5 a sportier appearance with a ride height that has been lowered by more than an inch compared to a standard Audi Q5.

The 2014 Audi SQ5 gets all of the expected “S” model upgrades, the new front fascia and grille, the standard 20-inch, triple-spoke wheels and the quadruple exhaust tips. Only two colors will be available on the SQ5: Panther Black and Estoril Blue. Inside, the SQ5 will get a sportier cabin with bright, “aluminum” pedals and shift paddles.

The new SQ5 is powered by a free-revving, supercharged, three-liter V6 engine with a displacement of 2,995 cc. Its compressor sits in the 90-degree V of the cylinder banks and is belt-driven by the crankshaft. Two rotors inside the supercharger spin at over 20,000 rpm. The air gap between them is just a few thousandths of a millimeter. The supercharger compresses the intake air to as much as 0.8 bar; two intercoolers then cool it for greater power.

The compressor is located downstream of the throttle valve. Its drive requires little engine power, as the density of the intake air is very low at loads below the supercharging level and when coasting. Torque develops early and quickly due to the short gas paths downstream of the supercharger. Various measures dampen compressor noise. A balance shaft in the engine’s alloy crankcase provides for greater smoothness. Adjustable intake camshafts and flaps in the intake ports provide for good charging efficiency in the combustion chambers.

An eight-speed tiptronic and quattro permanent all-wheel drive with torque vectoring transfer the power of the SQ5 firmly to the road. The fast-shifting automatic transmission offers two modes, and the driver can also switch gears manually via the standard shift paddles on the steering wheel.

The chassis of the Audi SQ5 lowers the body 30 millimeters (1.18 in). The springs and shock absorbers are more tautly tuned for a sporty and balanced setup. The 20-inch wheels are fitted with 255/45-series tires; 21-inch wheels are available. The brake calipers on the front axle sport the SQ5 badge. The electromechanical steering not only plays a major role in the efficiency of the SQ5, it also provides very precise road feel. Audi also offers the optional dynamic steering with a steplessly variable ratio. Control of it is integrated in the optional Audi drive select system, which allows the driver to switch among several modes in various systems.

The platinum gray radiator grille with its horizontal double bars in aluminum look, the distinctive bumpers and the roof spoiler are particularly eye-catching. V6 T badges adorn the front fenders. The gloss package and exterior mirrors in aluminum look accentuate the windows. In addition, there are two exclusive crystal-effect finishes: Estoril Blue and Panther Black.

Sportiness carries over to the interior. The instruments feature gray dials and white numerals; the pedals and shift paddles have a shiny aluminum-look finish.

The interior is bathed in black, with the headlining optionally available in Moon Silver. The standard power-adjustable sport seats are covered with a combination of Pearl Nappa leather and Alcantara, with four different colors of leather optional. The standard inlays are brushed aluminum. Options include Carbon Atlas, Piano finish or layered aluminum and wood in Beaufort black.

The SQ5 is scheduled to arrive at U.S. dealerships in the third quarter of 2013. The list of standard equipment is extensive. In addition to the aforementioned features, there are also xenon plus headlights with LED daytime driving lights, a stainless-steel loading-sill protector and a driver information system with color display. The luggage compartment offers up to 1,560 liters (59.33 cu ft) of capacity.

Audi can supply this dynamic SUV with an array of optional assistance and infotainment systems. MMI navigation plus and the Bluetooth online car phone provide the Internet services from Audi connect to the vehicle.

The Audi SQ5 has been designed specifically for the following markets: United States, Canada, Russia, China, Japan, Singapore, South Korea, South Africa, Mexico, Brazil, Argentina, Chile and the Ukraine. In Germany and many other European markets, the SQ5 TDI takes its place as the sporty top model in its series.