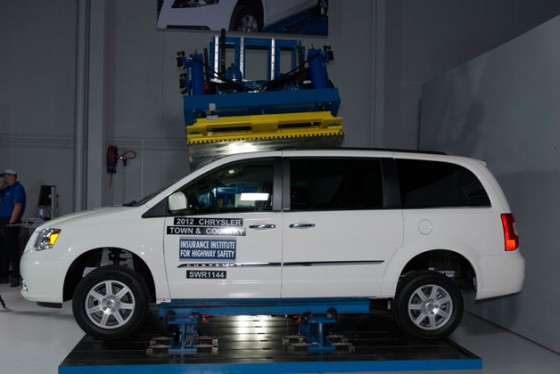 The best selling minivan has earned the IIHS Top Safety Pick award. The 2012 Chrysler Town & Country joins the Honda Odyssey, the Dodge Grand Caravan, the Volkswagen Routan and Toyota Sienna at the top of IIHS’s rankings.

ARLINGTON, VA – Five minivan models have earned the 2011 Top Safety Pick award from the Insurance Institute for Highway Safety, standing out from competitors for superior protection in rollover crashes.

The 2012 Chrysler Town & Country, Dodge Grand Caravan, and Volkswagen Routan – which all share a common structure – join the Honda Odyssey and Toyota Sienna in the Top Safety Pick ranks following new evaluations for rollover protection. To qualify for the designation, vehicles must have the highest rating of good for frontal, side, rollover, and rear crash protection and must have electronic stability control (ESC).

Two other minivans, the Kia Sedona and the Nissan Quest, fall short on rollover protection, with the Sedona receiving the lowest rating of poor and the Quest ranking as acceptable.

“Safety-conscious parents shopping for a family hauler should be pleased with today’s minivan choices,” says David Zuby, the Institute’s chief research officer. “At the same time, the ratings show that major differences remain in this segment when it comes to protection in a rollover crash.”

Rollover protection depends on roof strength, which is measured by pushing a metal plate against one corner of a vehicle’s roof at a constant speed. To earn a good rating, the roof must withstand a force equal to 4 times the vehicle’s weight before it caves in 5 inches. Put another way, it must have a strength-to-weight ratio of at least 4.

The rollover ratings for the Town & Country, Grand Caravan, and Routan are based on a roof strength test of a Town & Country, which had a strength-to-weight ratio of 4.51. The 3 vehicles underwent changes for the 2012 model year that affected roof strength, so this rollover rating only applies to 2012 models. In contrast, the Sedona had a strength-to-weight ratio of 2.31, while the Quest’s was 3.36.

Why roof strength matters: A good roof strength rating has been a requirement for Top Safety Pick since the 2010 awards. The Institute began the rollover ratings after research showed that strength-to-weight ratios higher than the government’s required minimum of 1.5 reduce the risk of serious or fatal injury in rollovers. When vehicles roll, their roofs hit the ground, deform, and crush. Stronger roofs crush less, reducing the risk that people will be injured by contact with the roof itself. Stronger roofs also can prevent people, especially those who aren’t belted, from being ejected.

In 2009, more than 8,000 people were killed in rollover crashes in the United States. That number has been falling as more and more vehicles get ESC, which can prevent many rollovers from occurring in the first place. As of the 2012 model year, the feature is required on all passenger vehicles. However, the government has estimated that 5,000-6,000 rollover fatalities still would occur each year if all passenger vehicles on the road had ESC, so stronger roofs are key.

About the award: The Institute awarded the first Top Safety Pick to 2006 models with good ratings for front and side protection and acceptable for rear protection. The bar was raised the next year by requiring a good rear rating and electronic stability control as standard or optional. With the addition of roof strength, the ratings now cover the 4 most common kinds of injury crashes.

The frontal crashworthiness rating is based on results of a 40 mph frontal offset crash test. The side rating is based on performance in a crash test in which the side of a vehicle is struck by a barrier moving at 31 mph. The barrier represents the front end of a pickup or SUV. Rear crash protection is rated according to a 2-step procedure. The first step is measuring head restraint geometry. Seat/head restraint combinations with good or acceptable geometry are tested dynamically using a dummy that measures forces on the neck.