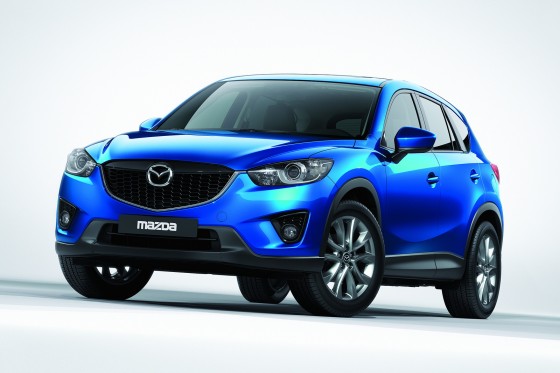 Mazda has unveiled a production version of its compact SUV that we will be named as the CX-5. The world debut of the Mazda CX-5 SUV will be made at the Frankfurt Motor Show on September and will go on sale in 2012.

Mazda says the CX-5 is its first production model to adopt the new “KODO – Soul of Motion” design theme that we saw in the Minagi and Shinari concept cars. The highlights of this new theme are a prominent front fascia and a more dynamic styling which the company says conveys “a strong sense of vitality and agility”.

The Mazda CX-5 is a CX-7’s smaller “brother” and is a first Mazda model which adopt the full range of the firm’s SKYACTIV technologies.

The Mazda CX-5 will be available with gasoline and diesel engines hooked up to manual and automatic transmissions. The euro version will be offered with the SKYACTIV-G gasoline 2.0-liter engine and the SKYACTIV-D 2.2-liter diesel in two configurations, Standard and High Power, which emit less than 120 g of CO2 per km.