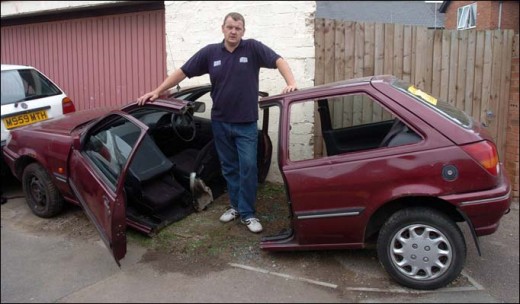 A man has saw his car in half with an angle-grinder in protest at it being clamped outside his home.

Ian Taylor, from Tredworth, Glos, said the untaxed Ford Fiesta was parked on his drive with only part of a rear wheel poking out on to the pavement.

The 40-year-old builder said the vehicle was going to be scrapped anyway, but he wanted to make a point.
A spokesman for NCP Services said half of the car was parked on the road and should therefore have been taxed.
Using a petrol-powered disc cutter, 40-year-old Taylor sawed the Ford Fiesta in half, almost setting it on fire in the process. Both the Fire Brigade and the police were called in, amid reports of a crazed man on the loose with a chainsaw.

Taylor, a builder, was originally going to restore the Fiesta but, realizing it was beyond repair, decided to scrap it. And then the clampers turned up. “We tried to talk to [the parking enforcers],” said 40-year-old Taylor. “I said, ‘you’re not taking it.’ I got my cutter and cut it in half,” he said. “[I’m] happy I got one over on them. They’re jobsworths, for the sake of an inch and a half on the path.”

The clampers saw it differently, however. “We were astonished at the reaction this gentleman had to the fact we put a clamp on his car,” said a spokesman for NCP Services. “It was a remarkable incident which highlighted some of the problems my colleagues face while they’re doing what is a very important job in ensuring that motorists tax their vehicle.”

“And in cutting his car in two,” continued the spokesman, “he managed to put both himself at risk and also a number of bystanders – along with ourselves, the police had to be called and the fire brigade, as he set fire to the car while cutting it in two.”