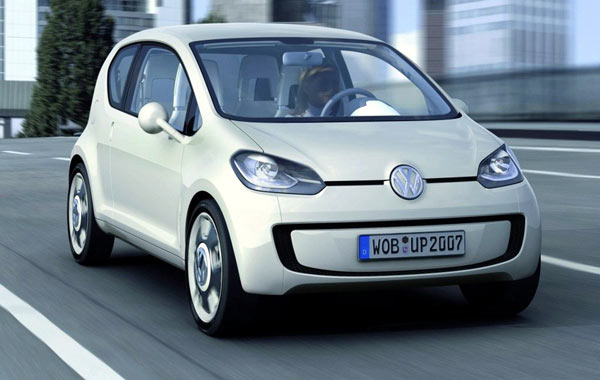 Volkswagen has been hit hard by the success of the Fiat 500. An unexpected breakaway hit, the Fiat 500 has pushed Volkswagen out of the lucrative super mini market. But Volkswagen has never been one to allow itself to be pushed out of any market, and the new Volkswagen Up! looks like it may be the next heir to the venerable Beetle in Volkswagen’s line of affordable super minis.

The Volkswagen Up! is the smallest car Volkswagen makes, even tinier than the petite Fox – which was specifically made for the unimproved, crowded streets of South America. With only 75 horsepower and rather unimpressive acceleration and handling (0-60mph in about 13 seconds – slower than a Prius) one might think that the car is too small and too underpowered for the modern consumer market. But speed and power aren’t the point of a micro car – the point is to be affordable, fuel efficient and ideal for city driving conditions. And it is in the city that the Up! excels.

Shorter in length than the Fiat, it has a superior turning radius, thanks to its wide and low stance. It also offers more room than any other micro-car. While the back seats are more suitable for children than adults, it has a relatively roomy pair of front seats, with plenty of leg room. The squared, boxy styling also ensures that the interior is easier to fill, with no stylish cross bars preventing you from getting your luggage or pets inside.

The Up! is also something of a fashion statement, intended to compliment your clothes and lifestyle by fitting in. Neat, organized and stylish, the car looks much nicer and more cheerful than other micro cars, helping it to be appealing. The low price tag is also alluring: it costs as much as the Fiat 500 while being much better equipped.

There is only one downside to the Up!: Volkswagen has stated they will not sell it in North America. Claiming it will undermine sales of their Golfs and Jettas, Volkswagen refuses to even show them at Canadian auto shows, much less sell them. However, as always, Volkswagen may ultimately cave to consumer pressure, especially in light of the rising popularity of super minis in North America.