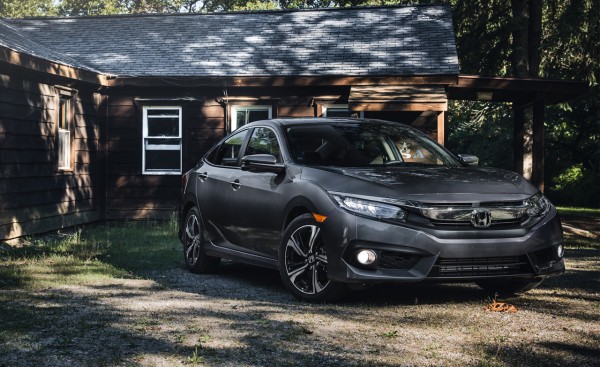 Yesterday on Wednesday night in Detroit Honda Motors unveiled the new 2016 Civic. The new 10th-generation Civic is a first Honda’s model to be developed entirely in the U.S. and is the first to feature a turbocharged engine. As Honda’s speaker said: it will get “a few ticks above” 40 mpg combined.

There are five models of the new 2016 Civic: sedan, five-door hatch, coupe, Si and Type R. No info about the Si and Type R yet, we expect it couple weeks later.

Entry-level LX and EX model trims will be powered by a 2.0-liter, 16-valve DOHC i-VTEC 4-cylinder that generates 158 horsepower, a 10 percent over the current Civic. The EX-T, EX-L trims and Touring trim levels will have a 1.5-liter, 16-valve, direct-injection DOHC inline-4 turbo under the hood. The forced induction motor will churn out 31 more horses than the outgoing 1.8 for a total of 174, the most powerful engine offered on a Civic not counting the Si performance models.

Two choices of transmission will be offered, a 6-speed manual or CVT. Sadly, it appears that the turbocharged motor will only be available with the CVT. As a result, Honda estimates a highway fuel economy rating of 40 miles per gallon, but more details will be revealed later.