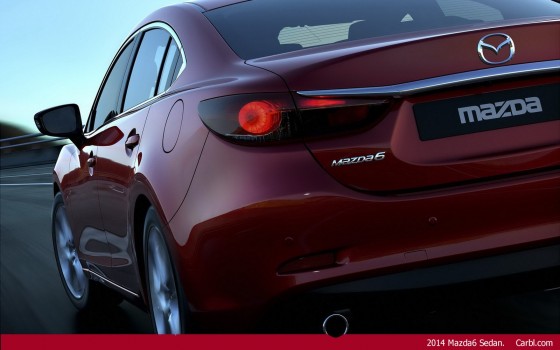 Mazda unleashed the first official photos and video of the all-new ‘6’ sedan, also known as Atenza in Japan. Mazda said that it will hold the world premiere of the 2014 Mazda6 with the 2.0-liter SkyActive model at the 2012 Moscow Motor Show in Russia, on August 29. The complete lineup of ‘6’ vehicles will make a debut in late September at the Paris Motor Show.

The new Mazda6 is a production version of Takeri Concept with the company’s more aggressive ‘KODO’ design. The mid-size sedan is the second Mazda after the CX-5 crossover to incorporate the full range of SKYACTIV technologies which brings a lightweight modular platform and a suite of clean gasoline and diesel engines.

On the Moscow show customers will see a Russian-spec version featuring a SKYACTIV-G 2.0-liter gasoline engine coupled to a SKYACTIV-Drive six-speed automatic transmission.

Mazda6 will also be offered with the brand’s Skyactiv 2.2-liter diesel engine with a two-stage turbocharger that is available in two flavors producing 150 HP or 175 HP. Both diesels can be linked to a 6-speed manual transmission or a 6-speed automatic unit.