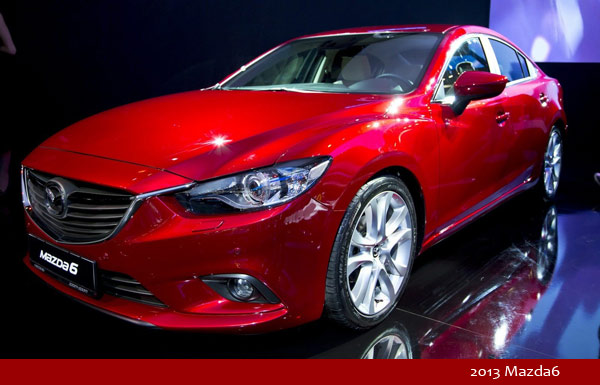 Mazda is unveiled its all-new Mazda6 mid-size sedan, which will make its debut at the LA Auto Show from November 30 to December 9, 2012 and will be launch in January 2013. The newMazda6 will gets a new SKYACTIV-G 2.5-liter gasoline engine and a number of fresh technologies. Its include the Smart City Brake Support (SCBS) system that is designed to mitigate front-end collisions at low speeds, and Mazda’s i-ELOOP, which is a capacitor-based brake energy regeneration system for improved fuel consumption.

The Mazda CX-5 will be introduced as a 2014 model with a SCBS system as part of an upgraded Technology Package for the Touring and Grand Touring grades. It also goes on sale in January. The restyled 2013 Mazda CX-9is available for order now and gets a new front fascia, tail lamps and rear bumper, along with some minor upgrades to the interior, including a new audio and infotainment system with a 5.8-inch color multi-information touch screen display.

“It’s definitely an exciting time for the Zoom-Zoom brand,” commented Jim O’Sullivan, president and CEO of Mazda North America. “The long-awaited, redesigned 2014 Mazda6 will naturally receive much interest but let’s not take away from our strong SUV lineup in the CX-5 and CX-9, which are segment leaders in their own right. Motorsports, an innate part of Mazda’s soul, will have important news to share and last but most certainly not least SKYACTIV-D will be here. I have no doubt that consumers will look at Mazda’s upcoming lineup with wide eyes, stirred hearts and driving inspiration,” he added.